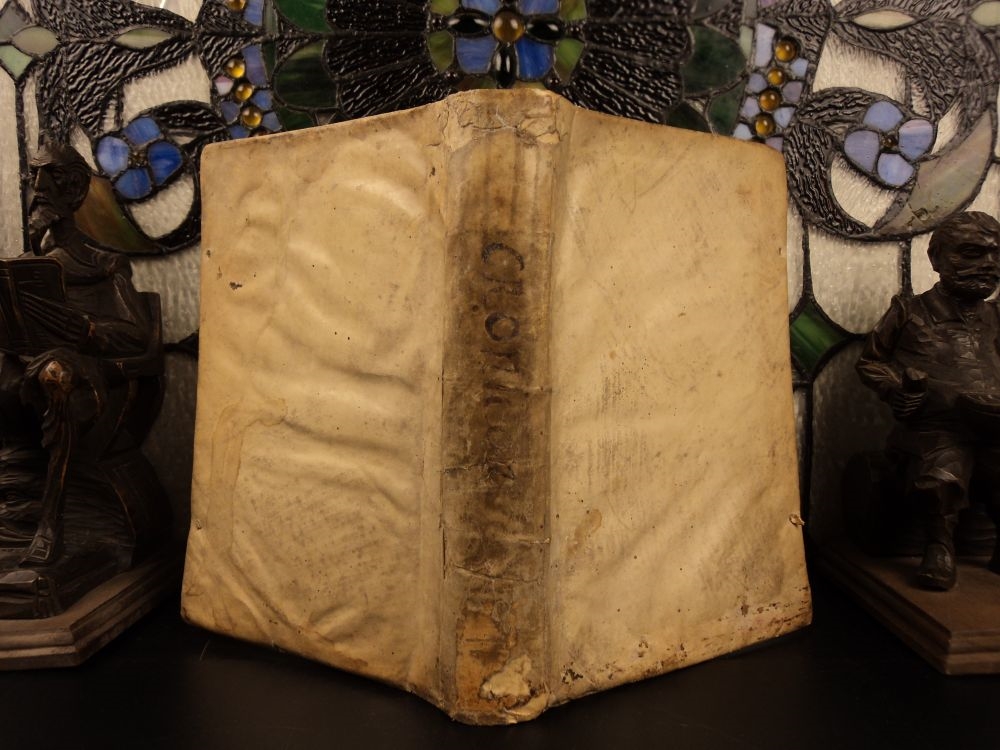 The Servite Order is one of the five original Catholic mendicant orders. Its objects are the sanctification of its members, preaching the Gospel, and the propagation of devotion to the Mother of God, with special reference to her sorrows.

We do not find this same book for sale elsewhere; however, we do find other 16th-century printings of Poccianti works for sale for over $7,750! 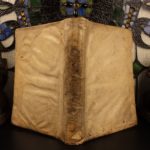 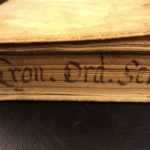 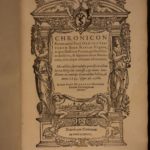 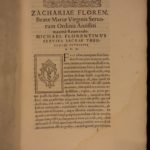 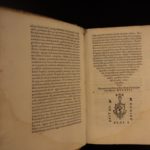 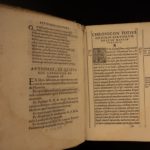 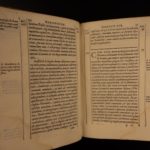 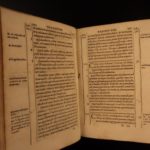 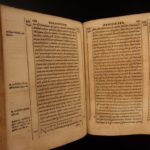 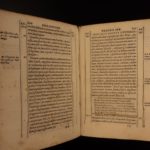 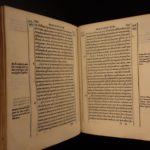 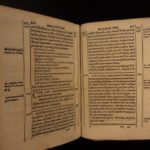 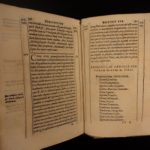 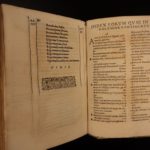 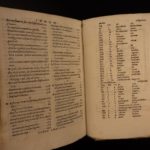 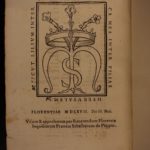 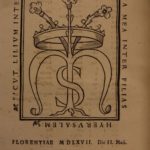 The Servite Order is one of the five original Catholic mendicant orders. Its objects are the sanctification of its members, preaching the Gospel, and the propagation of devotion to the Mother of God, with special reference to her sorrows.

We do not find this same book for sale elsewhere; however, we do find other 16th-century printings of Poccianti works for sale for over $7,750!

Pages: complete with all 332 pages; plus indexes, prefaces, and such

The Servite Order is one of the five original Catholic mendicant orders. Its objects are the sanctification of its members, preaching the Gospel, and the propagation of devotion to the Mother of God, with special reference to her sorrows. The members of the Order use O.S.M. (for Ordo Servorum Beatae Mariae Virginis) as their post-nominal letters. The male members are known as Servite Friars or Servants of Mary.

The Order of Servants of Mary (The Servites) is a religious family that embraces a membership of friars (priests and brothers), contemplative nuns, a congregation of active sisters and lay groups.

Amadeus of the Amidei (d. 1266), one of the seven founders of the Servite Order.

The Servites lead a community life in the tradition of the mendicant orders (such as the Dominicans and Franciscans). The Servite Order was founded in 1233 AD, when a group of cloth merchants of Florence, Italy, left their city, families and professions to retire outside the city on a mountain known as Monte Senario for a life of poverty and penance. These men are known as the Seven Holy Founders; they were canonized by Pope Leo XIII in 1888.[1]

These seven were: Buonfiglio dei Monaldi (Bonfilius), Giovanni di Buonagiunta (Bonajuncta), Amadeus of the Amidei (Bartolomeus), Ricovero dei Lippi-Ugguccioni (Hugh), Benedetto dell’ Antella (Manettus), Gherardino di Sostegno (Sostene), and Alessio de’ Falconieri (Alexius). They belonged to seven patrician families of that city. As a reflection of the penitential spirit of the times, it had been the custom of these men to meet regularly as members of a religious society established in honor of Mary, the Mother of God.[2]

Alexis Falconieri (d. 1310), one of the seven founders of the Servite Order.

From the beginning, the members of the Order dedicated themselves to Mary under her title of Mother of Sorrows.[1] Dedicating their devotion to the mother of Jesus, they adopted Mary’s virtues of hospitality and compassion as the order’s hallmarks.[3] The distinctive spirit of the order is the sanctification of its members by meditation on the Passion of Jesus and the Sorrows of Mary, and spreading abroad this devotion.[4]

The bishop of Florence approved the Friar Servants of Mary as a religious Order sometime between the years 1240 and 1247. The Servants decided to live by the Rule of St. Augustine, and added to the Rule their own expression of Marian devotion and dedication. By 1250 there were a number of Servants who were ordained to the priesthood, thus creating an Order with priests as well as brothers.[5]

Pope Alexander IV, favored a plan for the amalgamation of all institutes following the Rule of St. Augustine. This was accomplished in March 1256, and about the same time a Rescript was issued confirming the Order of the Servites as a separate body with power to elect a general. Four years later a general chapter was convened at which the order was divided into two provinces, Tuscany and Umbria, the former of which St. Manettus directed, while the latter was given into the care of St. Sostene. Within five years two new provinces were added: Romagna and Lombardy.[6]

St. Philip Benizi was elected general on June 5, 1267, and afterwards became the great propagator of the order.[4] The Second Council of Lyons in 1274 put into execution the ordinance of the Fourth Lateran Council, forbidding the foundation of new religious orders, and suppressed all mendicant institutions not yet approved by the Holy See. In the year 1276 Pope Innocent V in a letter to St. Philip declared the order suppressed. St. Philip proceeded to Rome, but before his arrival there Innocent V had died. His successor lived but five weeks. Finally Pope John XXI, decided that the order should continue as before. It was not definitively approved until Pope Benedict XI issued the Bull “Dum levamus” (February 11, 1304). Of the seven founders, St. Alexis alone lived to see their foundation raised to the dignity of an order. He died in 1310.

Pope Boniface IX granted the Servites the power to confer theological degrees on January 30, 1398, and the order established the Marianum in Rome.[7]

The new foundation enjoyed considerable growth in the following decades. Even in the thirteenth century there were houses of the order in Germany, France, and Spain. Early in the fourteenth century the order had more than one hundred convents including branch houses in Hungary, Bohemia, Austria, Poland, and Belgium; there were also missions in Crete, the Philippines (St. Peregrine-Philippine Vicariate) and India.

The disturbances during the Protestant Reformation caused the loss of many Servite convents in Germany, but in the south of France the order met with much success. The Convent of Santa Maria in Via (1563) was the second house of the order established in Rome; San Marcello al Corso had been founded in 1369. Early in the eighteenth century the order sustained losses and confiscations from which it has scarcely yet recovered. The flourishing Province of Narbonne was almost totally destroyed by the plague which swept Marseilles in 1720. In 1783 the Servites were expelled from Prague and in 1785 Emperor Joseph II desecrated the shrine of Maria Waldrast. Ten monasteries were suppressed in Spain in 1835. A new foundation was made at Brussels in 1891.

After the Risorgimento in 1870, the government of Italy closed the Marianum along with many other papal institutions. The institute was re-founded as the College of Sant Alessio Falcioneri in 1895.

At this period the order was introduced into England and America, chiefly through the efforts of Fathers Bosio and Morini. The latter, having gone to London in 1864 as director of the affiliated Sisters of Compassion, obtained charge of a parish from Archbishop Manning in 1867. His work prospered; besides St. Mary’s Priory at London, convents were opened at Bognor Regis (1882) and Begbroke (1886). In 1870 Fathers Morini, Ventura, Giribaldi, and Brother Joseph Camera, at the request of Bishop Joseph Melcher of Green Bay, Wisconsin, took up a mission in America, at Neenah. Father Morini founded at Chicago (1874) the monastery of Our Lady of Sorrows. A novitiate was opened at Granville, Wisconsin, in 1892. The American province was formally established in 1908.

Pope Pius XII, through the Congregation of Seminaries and Universities, elevated the Marianum to a pontifical theological faculty on 30 November 1950.

After the Second Vatican Council, the order renewed its Constitutions starting with its 1968 general chapter at Majadahonda, Madrid, a process which was concluded in 1987. In the same year, Prior General Michael M. Sincerny oversaw the creation of the International Union of the Servite Family (UNIFAS).[10]

Through the centuries, the Servite Order has spread throughout the world, including all of Europe, parts of Africa, Australia, the Americas, India and the Philippines. The general headquarters of the Servite Order is in Rome, while many provinces and motherhouses represent the Order throughout the world. In the United States there is one province of friars with headquarters in Chicago; there are four provinces of sisters with motherhouses in Wisconsin, Nebraska and two in Illinois.[1]

In common with all religious orders strictly so called, the Servites make solemn vows of poverty, chastity, and obedience. The particular object of the order is to sanctify first its own members, and then all men through devotion to the Mother of God, especially in her desolation during the Passion of her Divine Son.

The Servites give missions, have the care of souls, or teach in higher institutions of learning. The Rosary of the Seven Dolors is one of their devotions, as is also the Via Matris.

The fasts of the order are Advent, Lent, and the vigils of certain feasts.

All offices in the order are elective and continue for three years, except that of general and assistant-generals which are for six years.

Canonized Servite saints are: St. Philip Benizi (feast day on August 23), St. Peregrine Laziosi (May 4), St. Juliana Falconieri (June 19). The seven founders of the order were canonized in 1888, and have a common feast day on 17 February. The date first assigned to this feast day was 11 February, the anniversary of the canonical approval of the order in 1304. In 1907 this date was assigned to the celebration of Our Lady of Lourdes and the feast day of the Seven Holy Founders was moved to 12 February. In accordance with liturgical tradition, the date was changed in 1969 to the anniversary of the death of one of them, Alexis Falconieri, which occurred on 17 February 1310.[11]

Connected with the first order of men are the cloistered nuns of the second order, which originated with converts of St. Philip Benizi. These sisters have monasteries in Spain, Italy, England, the Tyrol, and Germany.

The Mantellate, is a third order of women founded by Juliana Falconieri, to whom St. Philip gave the habit in 1284. From Italy it spread into other countries of Europe. The Venerable Anna Juliana, Archduchess of Austria, founded several houses and became a Mantellate herself. In 1844 it was introduced into France, and was thence extended into England in 1850. The sisters were the first to wear the religious habit publicly in that country after the so-called Reformation and were active missionaries under Father Faber and the Oratorians for many years. This branch occupies itself with active works. They devote themselves principally to the education of youth, managing academies and taking charge of parochial schools and workrooms. They also undertake works of mercy, such as the care of orphans, visiting the sick, and instructing converts, etc.[4] They have houses in Italy, France, Spain, England, and Canada. In the United States they are to be found in the dioceses of Sioux City, Omaha, and Belville, NC, and Blue Island, IL.

There is also a confraternity of the Seven Dolours, branches of which may be erected in any church.

The Secular Order of the Servants of Mary (Servite Secular Order) is a Catholic organization of lay men and women plus diocesan priests living their Christian faith in the context of the world. They strive toward holiness according to the spirituality of the Servite Order, following the directives of their Rule of Life. Secular Servites are asked to do the following each day: live the Christian virtues of faith, hope and love; pray and try to read Sacred Scripture each day, and/or the Liturgy of the Hours; practice acts of reverence for the Mother of God daily, especially by praying the Servite prayer “The Vigil of Our Lady” and/or the Servite Rosary of the Seven Sorrows of Mary.