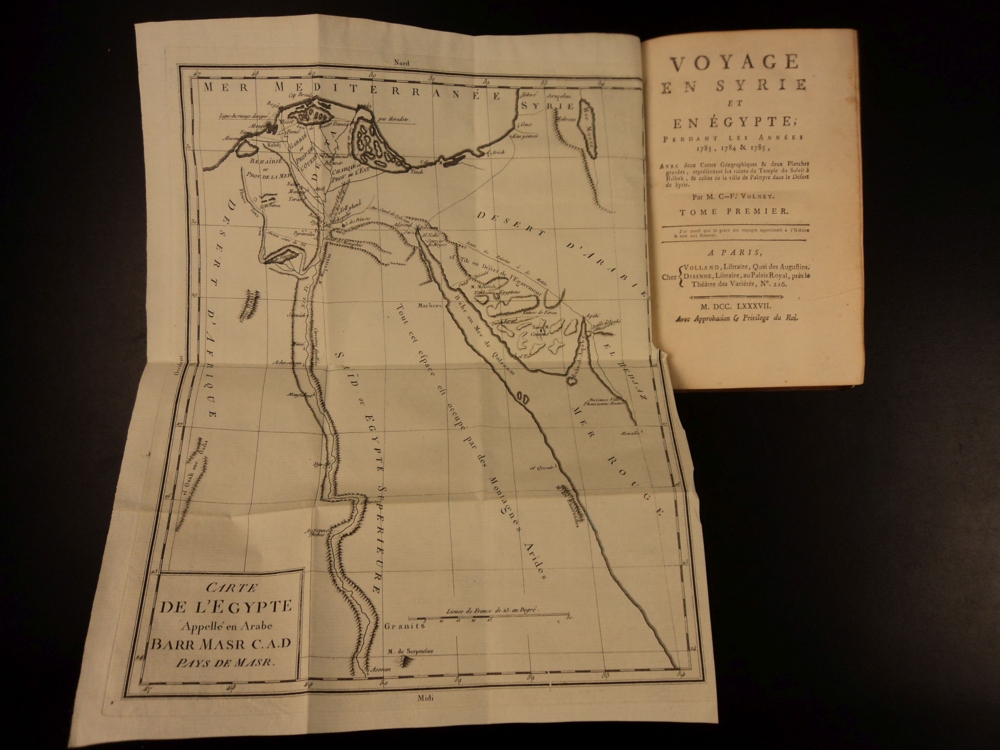 We find this same set for sale elsewhere for more than $1,700! 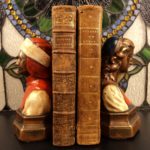 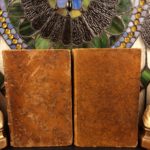 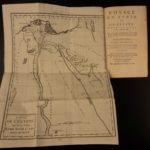 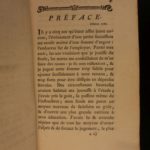 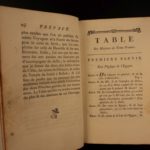 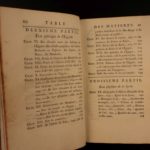 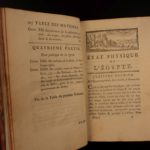 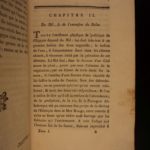 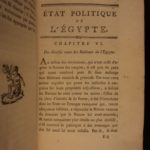 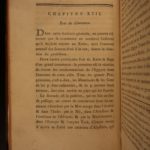 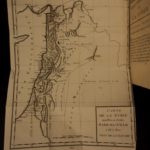 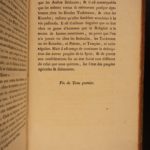 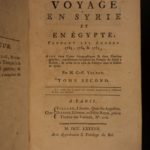 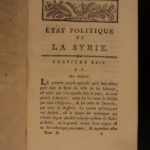 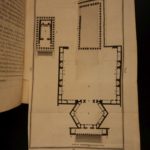 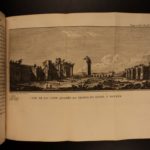 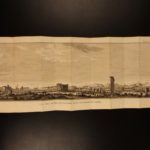 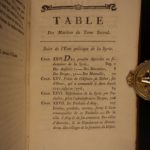 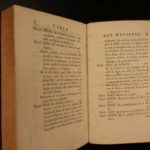 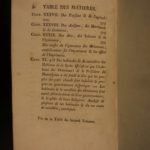 We find this same set for sale elsewhere for more than $1,700!

Constantin François de Chassebœuf, comte de Volney (3 February 1757 – 25 April 1820) was a French philosopher, abolitionist, historian, orientalist, and politician. He was at first surnamed Boisgirais after his father’s estate, but afterwards assumed the name of Volney (which he had created as a contraction of Voltaire and Ferney).

He was born at Craon, Anjou (today in Mayenne) of a noble family. Initially interested in Law and Medicine, he went on to study Classical languages, and his Mémoire sur la Chronologie d’Hérodote (on Herodotus) rose to the attention of the Académie des Inscriptions and of the group around Claude Adrien Helvétius.Soon after, Volney befriended Pierre Jean George Cabanis, the Marquis de Condorcet, the Baron d’Holbach, and Benjamin Franklin.

In 1787, Count Constantine de Volney—a French nobleman, philosopher, historian, orientalist, and politician—embarked on a journey to the East in late 1782 and reached Ottoman Egypt were he spent nearly seven months. Constantine de Volney was troubled much by the institution of slavery. His expressed opinion that the ancient Egyptians were black Africans much departed from the typical European view of the late eighteenth century, but it gave many people cause for reflection. During his visit to Egypt he expressed amazement that the Egyptians – whose civilization was greatly admired in Europe – were not White! “All the Egyptians,” wrote de Volney, “have a bloated face, puffed-up eyes, flat nose, thick lips – in a word, the true face of the mulatto. I was tempted to attribute it to the climate, but when I visited the Sphinx, its appearance gave me the key to the riddle. On seeing that head, typically Negro in all its features, I remembered the remarkable passage where Herodotus says: ‘ As for me, I judge the Colchians to be a colony of the Egyptians because, like them, they are black with woolly hair… “When I visited the Sphinx, I could not help thinking that the figure of that monster furnished the true solution to the enigma (of how the modern Egyptians came to have their ‘mulatto’ appearance) “In other words, the ancient Egyptians were true Negroes of the same type as all native-born Africans. That being so, we can see how their blood, mixed for several centuries with that of the Greeks and Romans, must have lost the intensity of its original color, while retaining nonetheless the imprint of its original mold. “Just think,” de Volney declared incredulously, “that this race of Black men, today our slave and the object of our scorn, is the very race to which we owe our arts, sciences, and even the use of speech! Just imagine, finally, that it is in the midst of people who call themselves the greatest friends of liberty and humanity that one has approved the most barbarous slavery, and questioned whether Black men have the same kind of intelligence as whites! “In other words the ancient Egyptians were true Negroes of the same stock as all the autochthonous peoples of Africa and from the datum one sees how their race, after some centuries of mixing with the blood of Romans and Greeks, must have lost the full blackness of its original color but retained the impress of its original mould.”[1]

He embarked on his journey to the East in late 1782 and reached Ottoman Egypt where he spent nearly seven months. Thereafter, he lived for nearly two years in Greater Syria in what is today Lebanon and Israel/Palestine in order to learn Arabic. He returned to France in 1785 where he spent the following two years compiling his notes and writing his Voyage en Egypte et en Syrie, which was published in 1787, and Considérations sur la guerre des Turcs et de la Russie in 1788.

He was a member both of the Estates-General and of the National Constituent Assembly after the outbreak of the French Revolution. In 1791 appeared Les Ruines, ou méditations sur les révolutions des empires, an essay on the philosophy of history, containing a vision which predicts the final union of all religions by the recognition of the common truth underlying them all.

Volney tried to put his politico-economic theories into practice in Corsica, where in 1792 he bought an estate and made an attempt to cultivate colonial produce. Chassebœuf de Volney was thrown into prison during the Jacobin Club triumph, but escaped the guillotine; he was some time professor of history at the newly founded École Normale.

In 1795 he undertook a journey to the United States, where he was accused (1797) by John Adams’ administration of being a French spy sent to prepare for the reoccupation of Louisiana by France and then to the West Indies. Consequently, he returned to France. The results of his travels took form in his Tableau du climat et du sol des États-Unis (1803).

He was not a partisan of Napoleon Bonaparte, but, being a moderate Liberal, was impressed into service by the First French Empire, and Napoleon made him a count and put him into the senate. After the Bourbon Restoration he was made a Peer of France, upon recognition of his hostility towards the Empire. Chassebœuf became a member of the Académie française in 1795. In his later years he helped to found oriental studies in France, learning Sanskrit from the British linguist Alexander Hamilton, whom he had helped to protect during the Napoleonic era.

He died in Paris and was buried at the Père Lachaise Cemetery.

Sometime during his stay in the United States, he and Thomas Jefferson entered into a secret arrangement whereby Jefferson agreed to translate Volney’s Ruins of Empires into English. Volney visited Monticello for two weeks during June of 1796. The two men also met on several occasions at the American Philosophical Society (APS). Jefferson was President of APS at the time and sponsored Volney’s induction into the organization. These meetings provided the two men with ample opportunity to conceive and discuss the translation project.[2]

Jefferson, then serving as Vice President under John Adams, appreciated the book’s central theme – that empires rise if government allows enlightened self-interest to flourish. This theme, Jefferson believed, represented an excellent summary of the Enlightenment-based principles upon which the U.S. was founded. However, Jefferson insisted that his translation be published only for certain readers, due to the book’s controversial religious content. Jefferson was preparing to make a bid for the Presidency of the United States in 1800; he was worried his Federalist opponents would attack him as an atheist, if it were known he translated Volney’s supposedly-heretical book.[citation needed]

According to the evidence discovered by the French researcher Gilbert Chinard, Jefferson translated the invocation plus the first 20 chapters of the 1802 Paris edition of Volney’s Ruins.[3] These first 20 chapters represent a review of human history from the point of view of a post-Enlightenment philosopher. Presumably, Jefferson then became too occupied with the 1800 Presidential campaign and didn’t have time to finish the last four chapters of the book. In these chapters Volney describes “General Assembly of Nations,” a fictionalized world convention wherein each religion defends its version of “the truth” according to its particular holy book. Since no religion is able to scientifically “prove” its most basic assertions, Volney concludes the book with a call for an absolute separation of church and state:

From this we conclude, that, to live in harmony and peace…we must trace a line of distinction between those (assertions) that are capable of verification, and those that are not; (we must) separate by an inviolable barrier the world of fantastical beings from the world of realities…[4]

Since Jefferson didn’t have time to complete the translation project, the last four chapters were translated by Joel Barlow, an American land speculator and poet living in Paris. Barlow’s name then became associated with the entire translation, further obscuring Jefferson’s role in the project.