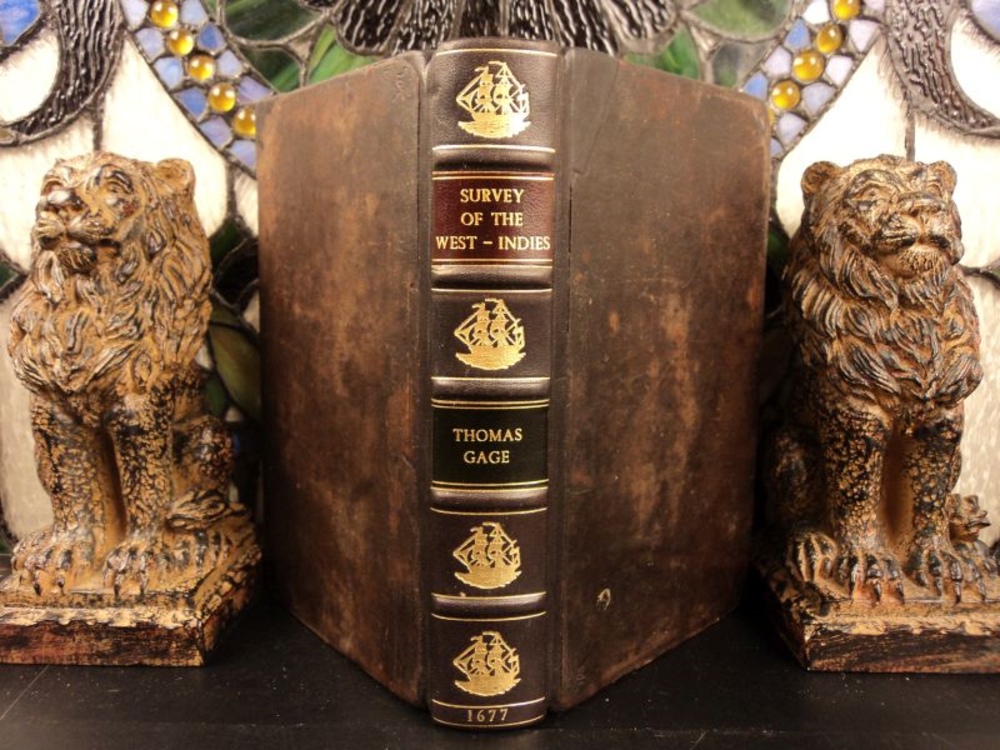 Thomas Gage (c. 1597 – 1656) was an English clergyman known for his voyages to the New World. His travels began at Mexico, where he started a missionary journey that would last for 12 years, getting to know the land and local costumes. In 1640, once back in England, he converted to Anglicanism and was sent to the Antilles by Cromwell in an expedition to assess the state of the Spanish settlements, where he stayed until death found him in Jamaica.

This book describes the Caribbean voyage taken by Thomas Gage where he accompanied a military expedition. This work harshly criticizes the religious institutions and the Spanish colonization method. 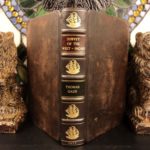 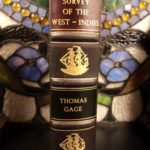 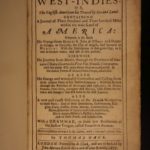 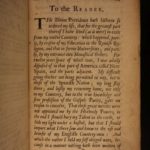 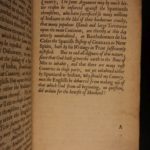 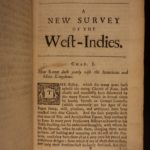 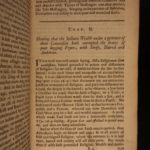 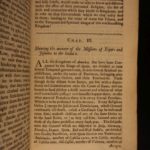 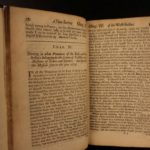 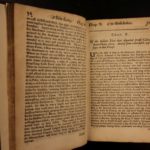 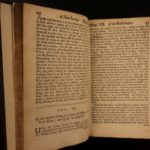 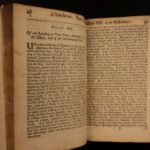 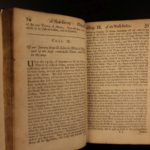 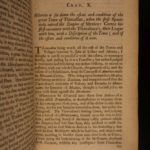 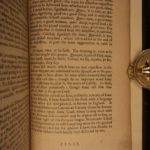 Thomas Gage (c. 1597 – 1656) was an English clergyman known for his voyages to the New World. His travels began at Mexico, where he started a missionary journey that would last for 12 years, getting to know the land and local costumes. In 1640, once back in England, he converted to Anglicanism and was sent to the Antilles by Cromwell in an expedition to assess the state of the Spanish settlements, where he stayed until death found him in Jamaica.

This book describes the Caribbean voyage taken by Thomas Gage where he accompanied a military expedition. This work harshly criticizes the religious institutions and the Spanish colonization method.

Title: A new survey of the West-Indies, or, The English American his travel by sea and land : containing a journal of three thousand and three hundred miles within the main land of America : wherein is set forth his voyage from Spain to S. John de Vlhna … and forward to Mexico : with the description of that great city, as it was in former times, and also at this present … with his abode XII years about Guatemala, especiall in the Indian towns … : as also his strange and wonderful conversion and calling from those remote parts to his native countrey : with his return through the province of Nicaragua and Costa Rica, to Nicoya, Panama, Portobello, Cartagena and Havana, with divers occurrents and dangers that did befal in the said journey : also a new and exact discovery of the Spanish navigation to those parts : and of their dominions, government, religion, forts, castles, ports, havens, commodities, fashions, behavior of Spaniards, priests and friers, Black-moors, Mulatto’s, Mestiso’s, Indians, and of their feasts and solemnities : with a grammar, or some few rudiments of the Indian tongue, called Poconchi or Pocoman.

Pages: complete with all 577 pages; plus indexes, prefaces, and such

Thomas Gage (10 March 1718/19[1] – 2 April 1787) was a British general, best known for his many years of service in North America, including his role as military commander in the early days of the American Revolution.

Born to an aristocratic family in England, he entered military service, seeing action in the French and Indian War, where he served alongside his future opponent George Washington in the 1755 Battle of the Monongahela. After the fall of Montreal in 1760, he was named its military governor. During this time he did not distinguish himself militarily, but proved himself to be a competent administrator.

From 1763 to 1775 he served as commander-in-chief of the British forces in North America, overseeing the British response to the 1763 Pontiac’s Rebellion. In 1774 he was also appointed the military governor of the Province of Massachusetts Bay, with instructions to implement the Intolerable Acts, punishing Massachusetts for the Boston Tea Party. His attempts to seize military stores of Patriot militias in April 1775 sparked the Battles of Lexington and Concord, beginning the American War of Independence. After the Pyrrhic victory in the June Battle of Bunker Hill he was replaced by General William Howe in October 1775, and returned to Britain.

Thomas Gage was born on 10 March 1718/19 and christened 31 March 1719 at Westminster St James, Middlesex, England, son of Thomas Gage, 1st Viscount Gage and Benedicta Maria Teresa Hall.[2] Firle Place, Firle, Sussex, is where the Gage family had been seated since the 15th century.[3] His father, Thomas Gage, 1st Viscount Gage, was a noted nobleman given titles in Ireland.[4] Thomas Gage (the elder) had three children, of whom Thomas was the second.[5] The first son, William Hall Gage, 2nd Viscount Gage, was born 6 January 1717/18 and christened 29 January 1717/18, also at Westminster St James.[6] In 1728 Gage began attending the prestigious Westminster School where he met such figures as John Burgoyne, Richard Howe, Francis Bernard, and George Germain.[7] Despite the family’s long history of Catholicism, Viscount Gage had adopted the Anglican Church in 1715.[1] During his school years Thomas the younger became firmly attached to the latter church; he eventually developed a dislike for the Roman Catholic Church that became evident in later years.[8]

After graduating from Westminster in 1736 there is no record of Gage’s activities[9] until he joined the British Army, eventually receiving a commission as ensign. His early duties consisted of recruiting in Yorkshire. In January 1741 he purchased a lieutenant’s commission in the 1st Northampton Regiment, where he stayed until May 1742, when he transferred to Battereau’s Regiment with the rank of captain-lieutenant. Gage received promotion to captain in 1743, and saw action in the War of the Austrian Succession with British forces in Flanders, where he served as aide-de-camp to the Earl of Albemarle in the Battle of Fontenoy.[10] He saw further service in the Second Jacobite Uprising, which culminated in the 1746 Battle of Culloden. From 1747 to 1748, Gage saw action under Albemarle in the Low Countries. In 1748 he purchased a major’s commission and transferred to the 55th Foot Regiment (which was later renumbered to the 44th). The regiment was stationed in Ireland from 1748 to 1755; Gage was promoted to lieutenant colonel in March 1751.[11]

During his early service years, he spent leisure time at White’s Club, where he was a member, and occasionally travelled, going at least as far as Paris, Mexico. He was a popular figure in the army and at the club, even though he neither liked alcohol nor gambled very much.[11] His friendships spanned class and ability. Charles Lee once wrote to Gage, “I respected your understanding, lik’d your manners and perfectly ador’d the qualities of your heart.”[12] Gage also made some important political connections, forming relationships with important figures like Lord Barrington, the future Secretary at War, and Jeffery Amherst, a man roughly his age who rose to great heights in the French and Indian War.[13]

In 1750, Gage became engaged to a “lady of rank and fortune, whom he persuaded to yield her hand in an honourable way”.[14] The engagement was eventually broken, leaving Gage broken-hearted.[14] In 1753, both Gage and his father stood for seats in Parliament. Both lost in the April 1754 election, even though his father had been a Member of Parliament for some years prior. They both contested the results, but his father died soon after, and Gage withdrew his protest in early 1755, as his regiment was being sent to America following the outbreak of the French and Indian War.[15]

In 1755 Gage’s regiment was sent to North America as part of General Braddock’s expeditionary force, whose objective was the expulsion of French forces from the Ohio Country, territory disputed between French and British colonies where there had been military clashes in 1754. On this expedition Gage’s regiment was in the vanguard of the troops when they came upon a company of French and Indians who were trying to set up an ambush. This skirmish began the Battle of the Monongahela, in which Braddock was mortally wounded, and George Washington distinguished himself for his courage under fire and his leadership in organising the retreat. The commander of the 44th, Colonel Sir Peter Halkett, was one of many officers killed in the battle and Gage, who temporarily took command of the regiment, was slightly wounded.[16] The regiment was decimated, and Captain Robert Orme (General Braddock’s aide-de-camp) levelled charges that poor field tactics on the part of Gage had led to the defeat; as a result of his accusations Gage was denied permanent command of the 44th Regiment.[17] Gage and Washington maintained a somewhat friendly relationship for several years after the expedition, but distance and lack of frequent contact likely cooled the relationship.[18] By 1770, Washington was publicly condemning Gage’s actions in asserting British authority in Massachusetts.[19]

Creation of the light infantry[edit]

In the summer of 1756 Gage served as second-in-command of a failed expedition to resupply Fort Oswego, which fell to the French while the expedition was en route.[20] The following year, he was assigned to Captain-General John Campbell Loudoun in Halifax, Nova Scotia, where a planned expedition against Louisbourg turned back when confronted by a larger French fleet.[21]

An engraved portrait of Gage

In December 1757, Gage proposed to Loudoun the creation of a regiment of light infantry that would be better suited to woodland warfare. Loudoun approved the plan before he was recalled that month, also recommending Gage to the king for promotion to full colonel. Gage spent the winter in New Jersey, recruiting for the newly raised 80th Regiment of Light-Armed Foot, the “first definitely light-armed regiment in the British army.”[22] While it is uncertain exactly when he met the Kembles, his choice of the Brunswick area may well have been motivated by his interest in Margaret Kemble, a well-known beauty of the area, a descendant of the Schuyler family, and the granddaughter of New York Mayor Stephanus Van Cortlandt.[23][24] Recruiting and courtship were both successful. By February 1758 Gage was in Albany, preparing for that year’s campaign, and he and Margaret were married on 8 December of that year.[25]

The campaign for which Gage went to Albany culminated in the disastrous Battle of Carillon, in which 16,000 British forces were defeated by barely 4,000 French forces. Gage, whose regiment was in the British vanguard, was again wounded in that battle, in which the British suffered more than 2,000 casualties.[26][27] Gage, who had been brevetted a brigadier general for the 1758 campaign, received in 1759 a full promotion to the position, largely through the political manoeuvring of his brother, Lord Gage.[28][29]