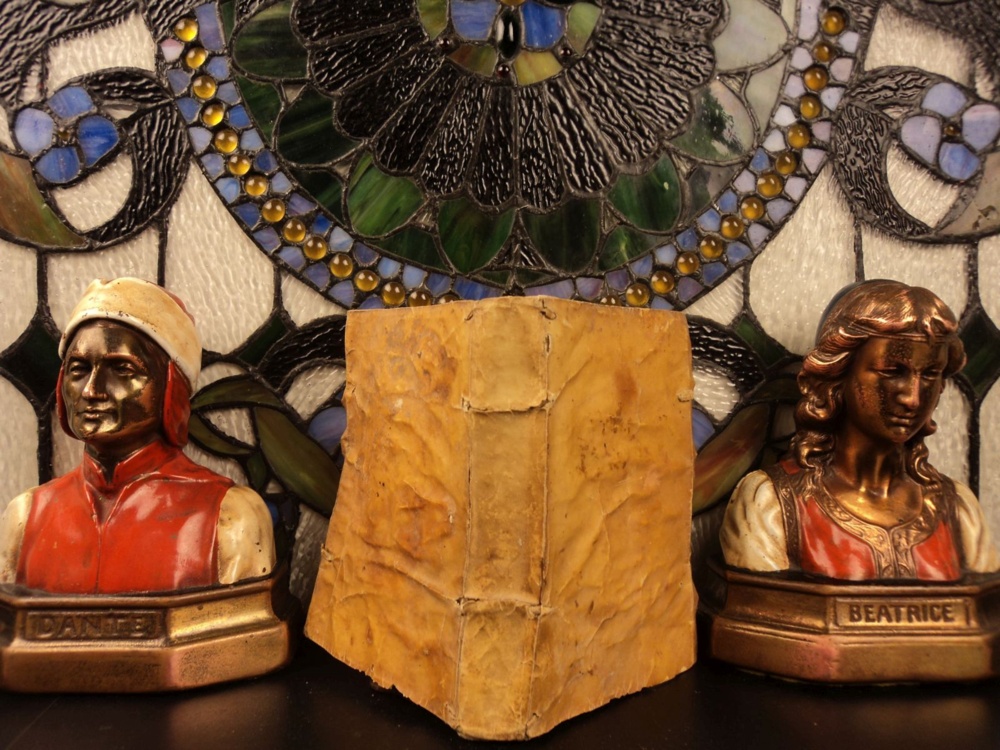 Saint Catherine of Siena, (1347 – 1380), was a tertiary of the Dominican Order and a Scholastic philosopher and theologian. 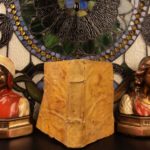 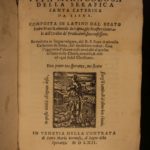 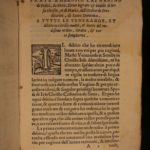 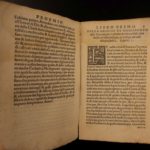 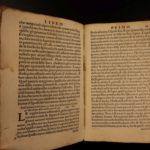 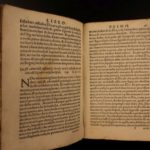 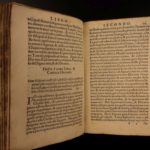 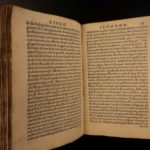 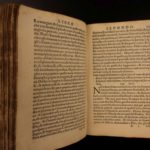 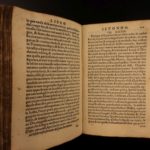 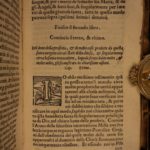 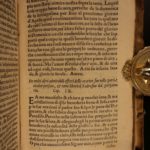 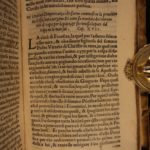 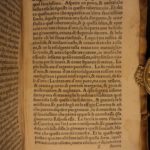 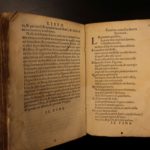 Saint Catherine of Siena, (1347 – 1380), was a tertiary of the Dominican Order and a Scholastic philosopher and theologian.

Pages: complete with all 184 leaves (368 pages); plus indexes, prefaces, and such

Saint Catherine of Siena, T.O.S.D. (March 25, 1347 in Siena – April 29, 1380 in Rome), was a tertiary of the Dominican Order and a Scholastic philosopher and theologian. She also worked to bring the papacy of Gregory XI back to Rome from its displacement in France and to establish peace among the Italian city-states. Since 18 June 1939, she is one of the two patron saints of Italy, together with St. Francis of Assisi.[1] On 3 October 1970, she was proclaimed a Doctor of the Church by Pope Paul VI, and on 1 October 1999, Pope John Paul II named her as one of the six patron saints of Europe, together with Benedict of Nursia, Saints Cyril and Methodius, Bridget of Sweden and Edith Stein.[2][3]

The house of Saint Catherine in Siena

Caterina di Giacomo di Benincasa was born on 25 March 1347 in black death-ravaged Siena, Italy, to Giacomo di Benincasa, a cloth dyer who ran his enterprise with the help of his sons, and Lapa Piagenti, the daughter of a local poet.[4] The house where Catherine grew up is still in existence. Lapa was about forty years old when she prematurely gave birth to twin daughters, Catherine and Giovanna. She had already borne 22 children, but half of them had died. Giovanna was handed over to a wet-nurse and presently died. Catherine was nursed by her mother and developed into a healthy child. She was two years old when Lapa had her 25th child, another daughter named Giovanna.[5] As a child Catherine was so merry that the family gave her the pet name of “Euphrosyne”, which is Greek for “joy” and the name of an early Christian saint.[6]

Catherine is said by her confessor and biographer Raymond of Capua O.P.’s Life to have had her first vision of Christ when she was the age of five or six. With her brother, she was on the way home from a visit to a married sister and is said to have experienced a vision of Christ seated in glory with the Apostles Peter, Paul, and John. Raymond continues that at age seven, Catherine vowed to give her whole life to God.[6][7]

Her older sister Bonaventura died in childbirth. While tormented with sorrow, sixteen-year-old Catherine was now faced with her parents’ wish that she marry Bonaventura’s widower. Absolutely opposed to this, she started a massive fast, something she had learnt from Bonaventura, whose husband had not been considerate in the least. Bonaventura had changed her husband’s attitude by refusing to eat until he showed better manners. This had taught Catherine the power of fasting. She disappointed her mother by cutting off her long hair as a protest against being overly encouraged to improve her appearance to attract a husband.[8]

Catherine would later advise Raymond of Capua to do during times of trouble what she did now as a teenager: “Build a cell inside your mind, from which you can never flee.” In this inner cell she made her father into a representation of Christ, her mother Lapa into the Blessed Virgin Mary, and her brothers into the apostles. Serving them humbly became an opportunity for spiritual growth. Catherine resisted the accepted course of marriage and motherhood, on the one hand, or a nun’s veil, on the other. She chose to live an active and prayerful life outside a convent’s walls following the model of the Dominicans.[9] Eventually her father gave up and permitted her to live as she pleased.

A vision of St. Dominic gave strength to Catherine, but her wish to join his Order was no comfort to Lapa, who took her daughter with her to the baths in Bagno Vignoni to improve her health. Catherine fell seriously ill with a violent rash, fever and pain, which conveniently made her mother accept her wish to join the “Mantellate”, the local association of Dominican tertiaries.[10] Lapa went to the Sisters of the Order and persuaded them to take in her daughter. Within days, Catherine seemed entirely restored, rose from bed and donned the black and white habit of the Third Order of St. Dominic. Catherine received the habit of a Dominican tertiary from the friars of the Order after vigorous protests from the tertiaries themselves, who up to that point had been only widows. As a tertiary, she lived outside the convent, at home with her family like before. The Mantellate taught Catherine how to read, and she lived in almost total silence and solitude in the family home.[10]

Her custom of giving away clothing and food without asking anyone’s permission cost her family significantly, but she demanded nothing for herself. By staying in their midst, she could live out her rejection of them more strongly. She did not want their food, referring to the table laid for her in Heaven with her real family.[11]

In about 1368, age twenty-one, Catherine experienced what she described in her letters as a “Mystical Marriage” with Jesus,[12] later a popular subject in art as the Mystic marriage of Saint Catherine. Caroline Walker Bynum, one of the most prominent medieval historians of her generation, explains one surprising and controversial aspect of this marriage that occurs both in artistic representations of the event and in some early accounts of her life: “Underlining the extent to which the marriage was a fusion with Christ’s physicality […] Catherine received, not the ring of gold and jewels that her biographer reports in his bowdlerized version, but the ring of Christ’s foreskin.”[13][14] Catherine herself mentions the foreskin-as-wedding ring motif in one of her letters (#221), equating the wedding ring of a virgin with a foreskin; she typically claimed that her own wedding ring to Christ was simply invisible.[15] Raymond also records that she was told by Christ to leave her withdrawn life and enter the public life of the world.[16] Catherine rejoined her family and began helping the ill and the poor, where she took care of them in hospitals or homes. Her early pious activities in Siena attracted a group of followers, women and men, who gathered around her.[4]

As social and political tensions mounted in Siena, Catherine found herself drawn to intervene in wider politics. She made her first journey to Florence in 1374, probably to be interviewed by the Dominican authorities at the General Chapter held in Florence in May 1374, though this is controverted (if she was interviewed, then the absence of later evidence suggests she was deemed sufficiently orthodox).[8] It seems that at this time she acquired Raymond of Capua as her confessor and spiritual director.[17]

After this visit, she began travelling with her followers throughout northern and central Italy advocating reform of the clergy and advising people that repentance and renewal could be done through “the total love for God.”[18] In Pisa, in 1375, she used what influence she had to sway that city and Lucca away from alliance with the anti-papal league whose force was gaining momentum and strength. She also lent her enthusiasm towards promoting the launch of a new crusade. It was in Pisa in 1375 that, according to Raymond of Capua’s biography, she received the stigmata (visible, at Catherine’s request, only to herself).[17]

Part of a series on

by era or century

Physical travel was not the only way in which Catherine made her views known. From 1375[17] onwards, she began dictating letters to scribes.[10] These letters were intended to reach men and women of her circle, increasingly widening her audience to include figures in authority as she begged for peace between the republics and principalities of Italy and for the return of the Papacy from Avignon to Rome. She carried on a long correspondence with Pope Gregory XI, asking him to reform the clergy and the administration of the Papal States.

Towards the end of 1375, she returned to Siena, to assist a young political prisoner, Niccolò di Tuldo, at his execution.[17][19] In June 1376 Catherine went to Avignon as ambassador of Florence to make peace with the Papal States (on 31 March 1376 Gregory XI had placed Florence under interdict). She was unsuccessful and was disowned by the Florentine leaders, who sent ambassadors to negotiate on their own terms as soon as Catherine’s work had paved the way for them.[17] Catherine sent an appropriately scorching letter back to Florence in response.[20] While in Avignon, Catherine also tried to convince Pope Gregory XI to return to Rome.[21] Gregory did indeed return his administration to Rome in January 1377; to what extent this was due to Catherine’s influence is a topic of much modern debate.[22]

Catherine returned to Siena and spent the early months of 1377 founding a women’s monastery of strict observance outside the city in the old fortress of Belcaro.[23] She spent the rest of 1377 at Rocca d’Orcia, about twenty miles from Siena, on a local mission of peace-making and preaching. During this period, in autumn 1377, she had the experience which led to the writing of her Dialogue and learned to write, although she still seems to have chiefly relied upon her secretaries for her correspondence.[4][24]

Late in 1377 or early in 1378 Catherine again travelled to Florence, at the order of Gregory XI, to seek peace between Florence and Rome. Following Gregory’s death in March 1378 riots, the revolts of the Ciompi, broke out in Florence on 18 June, and in the ensuing violence she was nearly assassinated. Eventually, in July 1378, peace was agreed between Florence and Rome; Catherine returned quietly to Florence.

In late November 1378, with the outbreak of the Western Schism, the new Pope, Urban VI, summoned her to Rome. She stayed at Pope Urban VI’s court and tried to convince nobles and cardinals of his legitimacy, both meeting with individuals at court and writing letters to persuade others.[23]

For many years she had accustomed herself to a rigorous abstinence.[25] She received the Holy Communion almost daily. This extreme fasting appeared unhealthy in the eyes of the clergy and her own sisterhood. Her confessor, Blessed Raymond, ordered her to eat properly. But Catherine claimed that she was unable to, describing her inability to eat as an infermità (illness). From the beginning of 1380, Catherine could neither eat nor swallow water. On February 26 she lost the use of her legs.[23]

St Catherine died in Rome, on 29 April 1380, at the age of thirty-three, having suffered a stroke eight days earlier.[26]